This for Sarah, because of the superb abundance of finishing treatments (for Complex Weavers).

In November this textile clearly indicated it should come home with me. The lady at the booth said it had been in her collection about 20 years; I don't know how much older than that it might be. It is Turkoman, and the wide part at the top is wool yarn done in the braid that tends to be called "fingerweaving." Six braids sewn side by side, and splendiforous fringe: wrapping with thread, wrapping with beads, tassel heads covered in what look like some sort of needlelace. Battered (tin?) beads - one of them has only its white (plaster?) core left. The fringe on the little tassels is thread over-twisted back on itself, so little beads and sequins can hang from it, and it doesn't have fuzzy cut ends. It delights me. 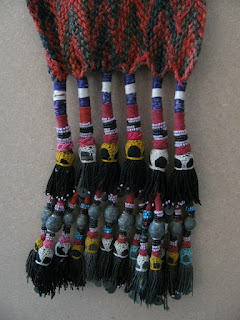 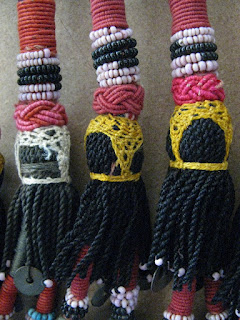 P.S. I belatedly realized I omitted measurements:
The width of the whole thing ranges from about 4 1/2" (right above the tasselage) to a bit over 5 1/2". The individual braids range from under 1" to a bit over 1" - they do not all have the same number of strands. I don't know if it shows very well in the photo, but there are actually several distinct shades in alternating braids; one of the reds is more intense, and one of the blacks is more blue. I wonder if it is really different dyes, or (bearing in mind something from Barber's Mummies of Ürümchi) if some of the yarn could be overdyed brown yarn instead of white.

The tassels are almost 7" from top wrapping to bottom bead. The braids themselves are hacked off irregularly at about 27-29"; fingerweaving tends to be worked from the center to one end, then reversed/upended to braid the other half. This leaves a distinctive diamond-ish pattern in the center, which is completely absent in the bit I have, so I don't know how long it may originally have been.

I also don't know what it might have been. It was made with love, but the yarn is kind of coarse. An animal trapping? Seems too stiff to be a sash, and in a cursory look at some pictures in Janet Harvey's Traditional Textiles of Central Asia and online does not seem to indicate any such thing.
Posted by Laura at 7:31 PM

What a fancy hairdo you have, little girl.....

That is most excellent indeed.

May I use your photographs in my presentation?

Elmsley Rose - yes indeed! And actually, I have seen pictures of similar tassels that are on long cords meant to be braided in your hair. I would love to do that...except I cut all my hair off a while back.

Sarah - of course you may use the photos! That's one reason why I posted biggish ones here. :) Let me know if you'd like me to try re-shooting anything.

Nice to meet you on Facebook :-).
The area where I live has loads and loads of African immigrants. I've never gotten to go into one of the shops, (being on limited time out with a carer when out of the house) but I'm betting there are very similar 'hair dressings' available at places like that.