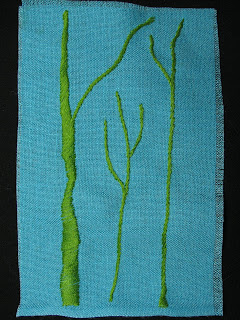 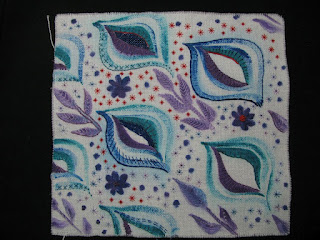 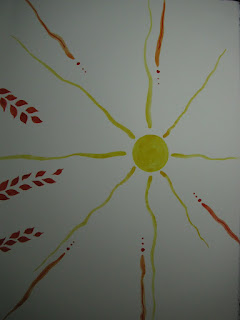 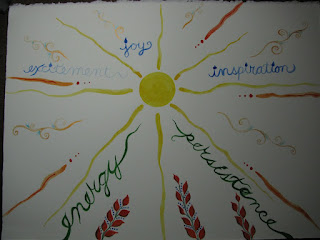 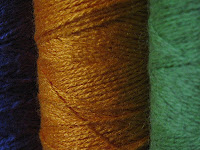 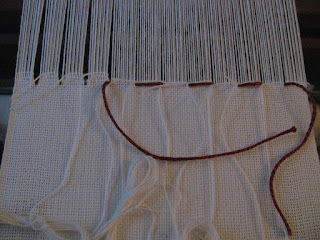 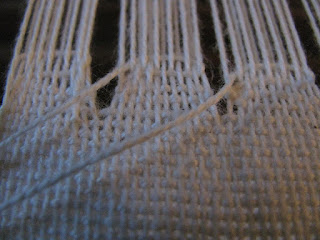 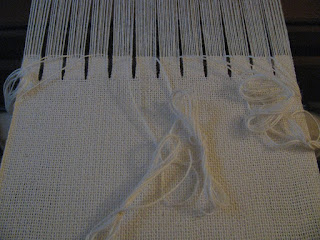 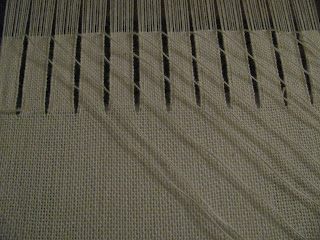 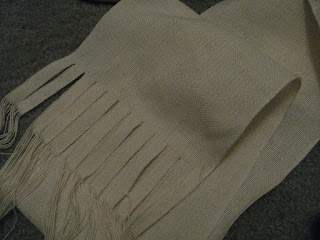 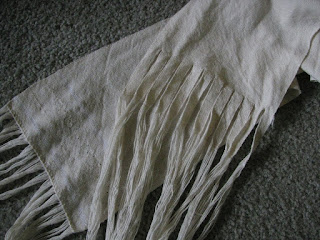 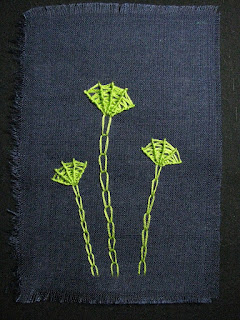 Since I thought of a great title, I had to prepare the flimsy cloth properly - lightweight stabilizer is ironed on the back, and it helped a lot. That is the Take a Stitch Tuesday 11: whipped wheel. I'd done wheels before, but hadn't thought of partial wheels. They're kind of a pain because of having to finagle the turns. It would have worked way better in perle cotton; I used four strands of DMC instead of two for the tallest one, and it helped a little.

Not inspired much by this one; it's more about the exciting colors. I think it could be good worked very tiny to make tangly bushes and vines. 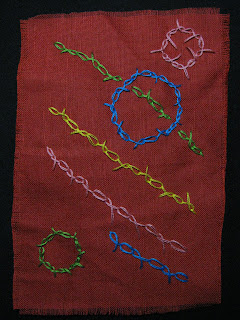 TAST 13 was a catch-up week. There were two mini challenges - to make a piece using 3-6 of the stitches covered so far; I originally wanted to, but now it is much more imperative to catch up. I'm kind of fixated. So I will do the second mini challenge: share tips on how I manage my time and space.

To which I say, HAH.

It is easy to get sucked away and not do anything - one of the reasons I'm doing TAST is to have a source of external motivation, so I work on stuff. And I've been wanting to do finite things, so I have at least the illusion of progress. I get more done when I have a plan - I sometimes avoid working on things because of the danger of getting in my good mind place, because that is dangerous after work. ("Whoah, it's HOW late, and I haven't even had supper?!")

I don't have family to plan around; work can be draining. There's a lot of creative stuff I lack energy for...a good reason to eat and sleep and exercise.

Workspace: not soothing. I still don't like it much; I sometimes think my favorite thing is the tulip tree outside the window...at least when it has leaves. But the organization is improving incrementally - organization aids production; I will work on things if I can just grab the ingredients. I don't mind rummaging in one drawer...but if multiple boxes are involved, I will not look. I will remain frustrated and not work on anything.

Summary: I will continue to work at planning, and at organization. Making art and projects needs to be a regular, normal part of everyday life.

Only the moon is actually satin stitch. The water is just long stitches. Satin stitch - would work better with slightly more thread (like a silk, instead of one strand of DMC) and a slightly looser weave. The long wobbly stitches would be better if this were mounted on a sturdy interfacing. But I like it anyway. 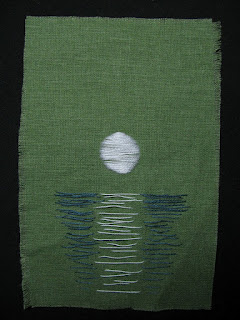 (See? One of the results of TAST is training me to focus on designing finite thingies. That is why I need to produce volumes of artifacts. One of these days I will excavate the final series of drawings I did for a class at OCAC - they are amazingly minimal.)

TAST 10: Running Stitch (and other tidbits) 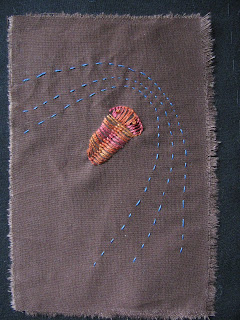 I decided I had no actual desire to experiment with making running stitch decorative; I wanted to draw with it. I much prefer the samples that are pictures, especially when they are so fast - this is another one-day wonder! It would have been just as fast and a bit more satisfactory if I'd drawn the trilobite outline. (This seems to be a theme.)

Take a Stitch Tuesday has, as always, marvelous examples. I've tried the pattern darning before; maybe I'll do a threaded running stitch another time. I think that to be more inspired to do decorative seam things, I'd actually need some seams to decorate - it might work to pre-make a pieced item, and decorate it. (Not this TAST, however!)

So, a recap of the first nine; with lots of colors, the camera is forced to acknowledge that what it sees is really what is there. 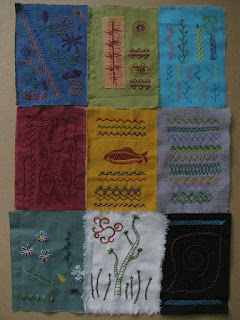 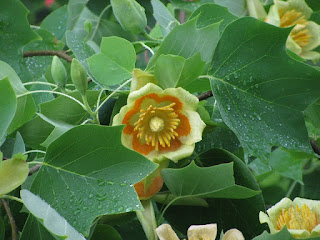 I highly recommend this tree if you have room for it. Just don't plant it near where you park your car - it produces prodigious amounts of sticky sap and flings it everywhere.

And one more random tidbit: a tuber duck! 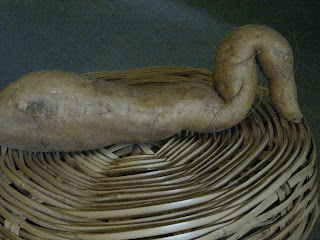 (If there are barnacle geese, there can certainly be tuber ducks.)

I broke the chain stitch record - this one, start to finish, was done Monday night. 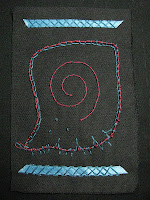 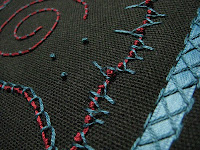 Herringbone couches the top ribbon, and interlaced chevron stitch the bottom, which was basically not worth the effort to do in one color because it looks very much like herringbone. The spiral is a leftover bit of DMC Cébélia No. 20 I found on my table and plied. The weird glyph shape is more of the same, but two strands knotted together. I knotted knots together towards the bottom to make extra big knots, where the couching switches from buttonhole to fly stitch. (I think I'm a little bored with flat photography; yay macro.)

Astronomical aside - Venus transit observation today! Despite the recent eclipse viewing, I was not prepared for solar photography, so once again I just drew a picture in my little sketchpad. Labeling it was important, because the sketch looks like a circle with a dot on it.

Earlier this evening, I wandered over to peer idly at the boxes stacked in the living room, wondering what to do next. Last weekend, I switched the boxes and the loom, moving nothing more than three times to accomplish this feat. A large part of the reason for that exertion was an effort to fool myself into getting interested in sorting papers again: make it look radically different, because different is interesting to artist brain.

Idle contemplation zeroed in on the loom. I don't remember quite how I folded it up to move, but it involved a wrench. I drifted over to the loom and contemplated further.

I found myself contemplating the little brackets that hold the treadles. They can be pretty irritating, because one or the other will swing out to the side, thus dropping the treadle contraption loosely to the floor. Aggravating.

But lo, then I revelated.

The original owner put it together wrong. 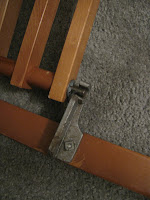 The bracket that's on the right should be on the left, and vice versa. So obvious in hindsight, and what a simple fix to avoid future annoyance!

EDIT: I was wrong. The brackets are too far apart if they are switched. I was able to tighten them more than I expected, and will just have to pay closer attention in the future.