A number of years back I became enthralled with Central Asian triangular amulets. Where did this all start? Reading "The Afghan Amulet: Travels from the Hindu Kush to Razgrad" by the intrepid Sheila Paine, and her book "Amulets: Sacred Charms of Power and Protection," not long after. Many of the triangular amulets I have spotted in pictures since then are really simple, barely more than triangles of fabric scraps. Some are more elaborate, and naturally I needed to make an elaborate one. I'm also quite smitten by mirror embroidery, so mine needed a mirror. And, lest the result be too stuffy, a googly eye. (Against the evil eye, get it?)

The mirror and the eye are attached with shisha stitch, and supplemented with smatterings of [uninspired] embroidery. At some point I produced a fingerloop braid to hang it by, and then it went dormant. It was in this stage for at least--yikes, maybe four years? Ladle Bug*** is observing: 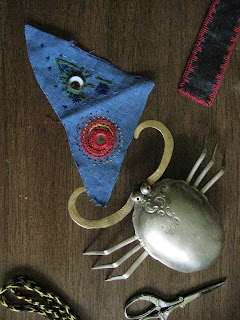 (Seriously, Blogger? Why do you insist on rotating this?)

Recently I came across it--still miraculously in concert with its fingerloop braids and its assortment of cloves. Cloves were used on some amulets, and I had cloves, so I thought I should include them. The ones I used I believe I salvaged after making chai. While they were sodden, I stuck them on pins to make holes for eventual sewing purposes, and left them on the pins while they dried to prevent the holes from shrinking so small I couldn't get a threaded needle through them. So there were two or three straight pins full of dried cloves tagging along with the other ingredients.

Here it is--made three dimensional, cloves attached, tassels in progress. I wanted fancy tassel heads, and so I figured a bit of padding was in order (hence the black circles). Each bunch of cloves is on a short piece of wire with a rolled up loop at each end to stitch through. I think I would just use thread another time. 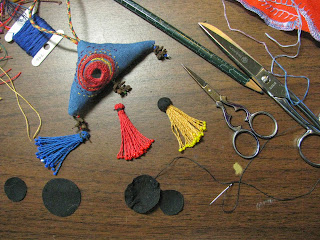 A close-up of buttonholing in progress, and a view of the tassel fringe. It is overtwisted and plied back on itself after a bead was positioned at the bend--so, no cut ends. 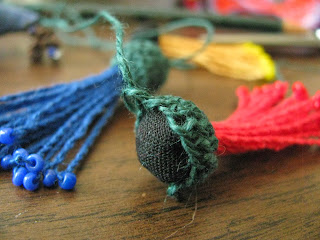 Linen is not satisfactory for this, being resistant and not having much body once you get done. Also, there has to be a better way to do it; I would love to watch a Central Asian woman make this kind of twisted fringe--they manage to do the overtwisting and beads AND incorporate that into a woven or twined band. I have to ponder a bit more and maybe do some experimenting. Or maybe I'm on the right track and the reason I used shortish lengths of string is why they change colors frequently...they are also using short pieces of string, because maybe it's just a pain to do.

Here is the amulet, finished: 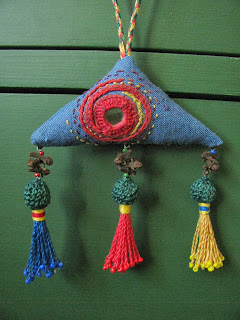 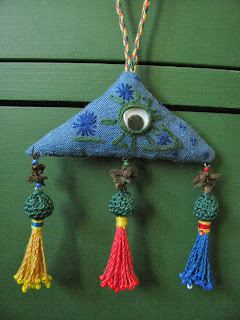 And one more of the in-process photos, so you get the shiny mirror effect: 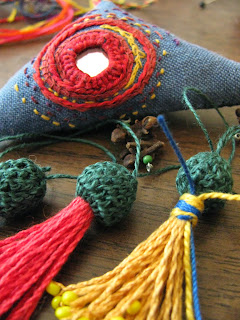 I think the only reason this remained unfinished for so long was that I got stuck on what to do with the embroidery. But this summer when I found it I decided--whatever, I just want it done, and I left the embroidery as it was. It is nicer done than waiting in limbo for a solution. It has been hanging by my desk at work for almost two months now; I cannot attest to noticing any effect. I think evil eye may not be a problem in Hillsboro, and this particular amulet doesn't seem to alleviate any normal work irritations--but I enjoy looking at it, so it helps in that way!

***Ladle Bug, aka Spoon Bug, joined my household a few years ago. I have a card saying, "Briana Kaufmann and Peter Neufeld."
Posted by Laura at 10:53 PM 2 comments: