Last night's idea was "move boxes." (Oil painting from Sunday was not dry enough to finish.) So I moved boxes. Things have been stagnant for a while, and it's been getting to me. All the easier/more obvious things have been dealt with, and the last bit is taking forever because I'm trying to not just put stuff away to get it out of sight, since out of sight = out of mind, and I really, truly wish to sort things out and have them accessible in order to (gasp) USE them.

I poked through several small cardboard boxes, dislodged a hammer and several nails, and hung two more things on the wall (for a total of three). The box containing my camera software is now more accessible, so when I feel up to it I will be able to mess around with trying to get it to work again on my computer.

I moved boxes, shifting a bin of camping things into the coat closet, which entailed first emptying the floor of said closet, which was not as bad as it sounds since said closet is not very big.

I should be able to put the vacuum cleaner in the linen closet. The shelves are only half the depth of the closet, so there is a lot of vertical air. In that case, I have to find somewhere else to put my clothes drying racks, which I currently keep in the linen closet, because there wouldn't be enough room for them if the vacuum cleaner was in there. They might fit in the bedroom closet if I didn't have the suitcases there. But that's kind of the only place for the suitcases.

Due to the layout of my apartment, the main bathroom has a lot of wasted space, mainly in the corner behind the door. I'll probably end up putting the boxes from the outdoor/balcony closet there. (The outdoor closet is smaller, too, and this balcony is not shaped like an outdoor room, so once again I have to come up with a new system.) Once I get the boxes out of the outdoor closet, I can install a hook to hang up my bicycle, which otherwise won't fit. But in the meantime, before I move the boxes, perhaps I can put the clothes drying racks behind the door in the bathroom, so I can put the vacuum cleaner in the linen closet instead of leaving it in the living room where it has been since late August.

Soothing picture of trees. It's impossible--for an amateur like me, at least--to take a really satisfactory photo of giant redwoods: 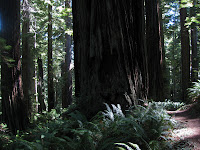