Thanks to Sarah for posting the link to Terri Windling's series of pictures of people's desks--I love seeing how other people set things up. A touch of voyeurism, I suppose, coupled with dosages of "oh, I'd like that" and "oh, I'm glad I'm not the only one that ends up like that." My personal best example: realizing I was just about to set a dish of inky water on top of a piece of velvet. It would be nice to have two work surfaces...and a large enough space that I could not reach both from the same seat. I have more space in my new apartment, but two work surfaces...not feasible at the moment.

Here is my project table--which looked radically different about an hour later, as I removed the embroidery stratum to provide access to the painting stratum. 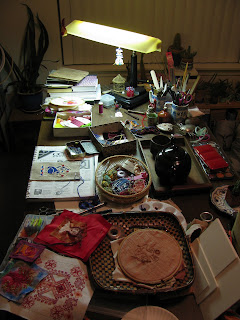 A bit closer, with the embroidery on top of the weaving notes on top of the sketchbook (and a glimpse of my new little haworthia in the background): 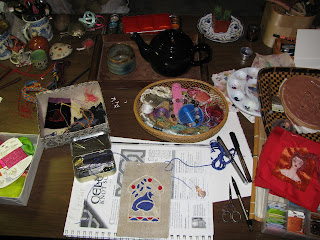 There was a spot of sun today. I took a few photos of the charming feline; this is the only one where she was looking out intently. In the other photos she was obviously sitting there with her eyes closed! 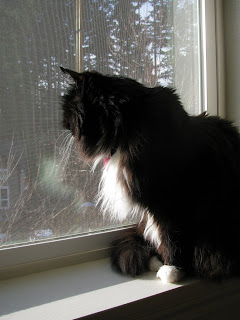 This summer I decided I need to start making tiny, finite projects so I could actually finish something once in a while to kind of get the idea what that was like. There are pictures of the first two of these from back in July.

I did finish one of them pretty quickly. It was inspired by two samples from the fabric store--the orange velveteen was just appealing, and the magenta seemed to go with it (the colors are off on my monitor, making the magenta bluish). Two by three inches in size, chain stitch, several couched ribbons, and a scattering of French knots. This may be the first time--in an embroidery, at least--that I consciously added some complementary color, having finally realized that complete lack of contrast was what made pleasingly analogous color schemes kinda boring. 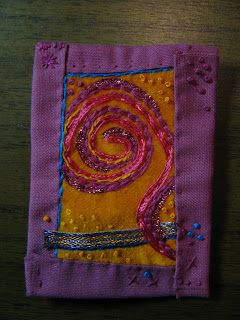 And then there was this one, not so quickly finished because of how I "had" to do the leaves. They're not chain stitches--it seemed like that would be too bulky. I had one needle with three strands of DMC, and I'd make a tiny loop and couch down the tip of it with the single strand of DMC in another needle. So that's why it took so long; I couldn't usually stand to do more than about 10 leaves at a time! and usually less. 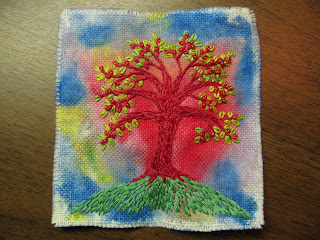 A bit over a week ago I added the beads and filled in the trunk, and yesterday I did the hill--I had tried last week, but couldn't figure out what to do (it turns out I needed to use a different green and a plainer stitch). It doesn't lie flat, between tension of stitch and thickness of thread. I'm not sure how (or, honestly if) I will finish off the edges--I wish the fabric paint had been a touch more thorough at the edges; I like the raw edges fine, I'm just not keen on the white showing.

Notes (so I can find them again): 22-count cotton evenweave a bit over 4x4 inches square, painted with Jacquard Textile colors and embroidered with DMC cotton: