At long last, this afternoon I finally finished a weaving that has been languishing on the loom for ages. It was a warp set up for doubleweave (weaving two layers of cloth at the same time). More accurately, it was the tail end of a warp from ages ago when I took a weaving class. I wasn't able to finish the whole thing during the class, and I had to take it off the loom. (Couldn't waste all that string, after all.) I got my own loom a few years later, and at some point I decided I really had to finish up this warp. The main problem was that I wasn't very interested in it anymore...I finally figured out a simple pattern that would take advantage of the doubleweave set up, wherein one can laboriously row by row manually interchange the layers and create a pattern. I've cranked through it in the last few weeks; it came out okay, but I had tension issues and selvedge issues.

This is a close up of the patterning, which is made by trading the top layer to the bottom and the bottom to the top. 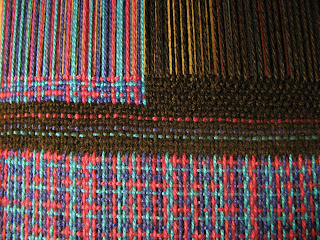 Now you can see the pattern--I told you it was simple! One interchange per row, that's it. 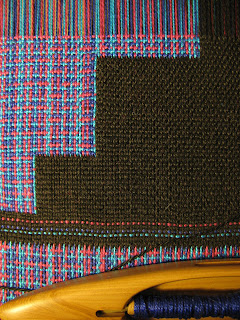 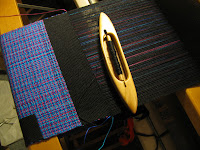 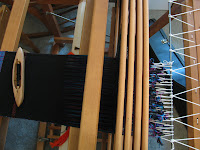 Of the next two pictures, first is the front, then the back--you can plainly see the result of the tension issues in the spots where some of the threads didn't interweave properly. And the thicker lines are inattention issues, where I got the weft in the same shed twice. 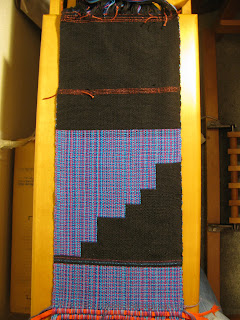 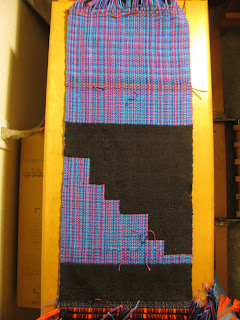 Also, the sett was too close, so it's not a balanced plain weave--not necessarily a bad thing, just not what I had in mind. The section I had woven during the class seemed too loose...that definitely wasn't a problem here.

The best studio accessory--the feline muse--she has to go away from the living room when the loom is in use. (Sounds and moving parts. Not good.) One of the places I find her is the studio nap box. 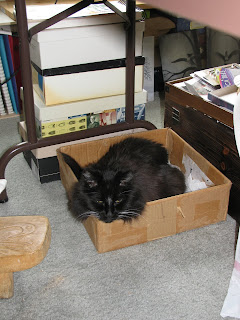 This may be the first time that I finished something and posted the same day!
Posted by Laura at 11:33 PM No comments: