Medieval Inspiration for an Embroidery...

or, Breakfast at the Ashmolean.

It’s just wonderful that institutions like the Ashmolean have invested in making their collections available online. Much as I would love to visit in person, it just isn’t practical...at least on short notice. And they wouldn’t allow tea!

In late December I finished the last bit of a small embroidery I started a long time ago. This experiment was prompted by historic examples in several books—separate inspirations for techniques and for motif. 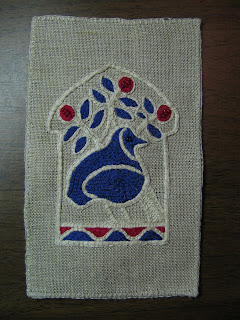 "Embroideries and Samplers from Islamic Egypt," by Marianne Ellis.

Embroidery #5, pg. 16-17, done on linen fabric, is couched linen thread with silk filling in the background. Probably originally the end of a shawl, only the roughly cut off embroidered section remains. You can see it online courtesy of the Ashmolean Museum:
Textile fragment with Naskhi inscription, birds, and palmettes
Egypt, 12th century (1101 - 1200)

Embroidery #9, pg. 21, was couched with buttonhole stitching; that intrigued me, and I decided to try it.
Textile fragment with band of Naskhi inscription, scrolls, and floral pattern
Egypt, Ayyubid Period (1169 - 1260)

I really like how the couching turned out, though the effect I got in my embroidery is different than that in the picture. Some of the reason is probably that my embroidery was not buried in Egypt for 800 years.

The design is one I made up; basically, I needed something that fit the linen I found in my stash, which was left over from something else. The shape of my fabric (about 4 ¼” x 6 ¾”/11 x 17.5 cm hemmed) dictated a narrow composition), and the shape of the border is a nod to the Islamic inspiration for the embroidery technique I used.

As for imagery, I’ve been hooked on pomegranates for some time; conveniently, they were ubiquitous for centuries of textile designs. I was also enamored of the adorable little partridges from a 12th century Italian tapestry weaving. I found it in "Tongeren. Basiliek van O.-L.-Vrouw Geboorte: Textiel van de vroege middeleeuwen tot het Concilie van Trent" (a collection of medieval textiles in the Basilica in Tongeren, Belgium).

Woven silk tapestry fragment, used as a wrapper for a relic; Palermo, 12th century. It is very badly deteriorated, and was “repaired” with embroidery in the 19th century.

Thanks to the Royal Institute for the Artistic Heritage of Belgium, you can see this online: go to http://www.kikirpa.be/www2/wwwopac/en/object.html and search for cliché number: N7124 (the cliché number search box is under “Administrative Data”)

I decided the bird in my embroidery needed to be as big as possible, and I filled in the top with as many pomegranates and leaves as I could fit.

The filling stitches used in the Egyptian embroideries seem to be mostly stem stitch, but I confess I deciding on chain stitch for the partridge anyway—it fills in faster, and kind of looks like feathers. And I’m not sure what kind of silk it is, and since I need it for another project I thought chain stitch might possibly use less thread. The beads are also my idea.

Embroideries and Samplers from Islamic Egypt. Marianne Ellis. Ashmolean Museum, Oxford, 2001.
1 85444 135 3 (paperback)
1 85444 154 X (hardback)
This excellent book is available from the Ashmolean—not only can you order directly from them, but they have THE ENTIRE THING online, hooked up to the collection! I just discovered this today, as I was tweaking my essay and playing with the links again. When you look at an item that was included in the book, you get the option to read the “object entry” about the item, and also to follow back to the Ashmolean publications…and then you can find all the items that are online that were included in the book. It’s very cool!

I recommend the book highly—it has superb photos, often full-page, in which you can usually see the threads of the ground fabric and of the embroidery; how often can you say that about photos of medieval textiles? Also there are a couple of diagrams that are probably not in the online version (a couple of stitches and some charted patterns).

Tongeren. Basiliek van O.-L.-Vrouw Geboorte: Textiel van de vroege middeleeuwen tot het Concilie van Trent. (Clenodia Tungrensis I.)
Uitgeverij Peeters, Leuven, 1988.
978-90-6831-125-9
Available through Oxbow/David Brown Book Co. as well as from the publisher; as you probably guessed, it is written in Dutch. It contains many, many delightful things, but the photographs are mostly black and white, and often smaller than you’d like. There are some very nice diagrams (mostly of weaving structures), and detailed textile information. I recommend this book highly, but with the caveat that I think it would appeal mainly to serious textile geeks as it is heavier on the brain candy than the eye candy, especially if you don’t know Dutch—though since my German is decent, and I’ve read a bunch about textiles, I was able to work my way through it all right. That, and a serious need to know more about reliquary pouches.
Posted by Laura at 3:15 PM