I have two blog posts planned but not done, and this is not one of them. Today my sweet kitty died. The last few months have been a gift - once food & medication were solved, she ended up having a lot of really good time, especially the last few weeks. She napped in different places, looked out the door a lot and went out on a few balcony patrols (yesterday was a good one). She collected me in the morning and at bedtime and even went to bed before me a few nights, climbing up her "stairs" of boxes since she wasn't very springy for the last month or so.

She had a nifty tent box the last few weeks, but recently felt good enough to come hang out near me like usual instead of in the box, whenever I would actually sit still for more than 40 seconds. 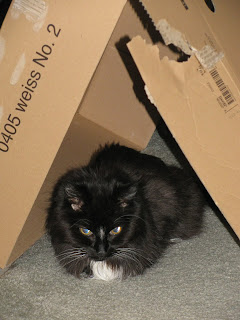 Fluffy banner tail enthusiastic kitty explored the box yesterday when I trimmed off the in-the-way flaps. (They were only in the way for a human, not a kitty.) 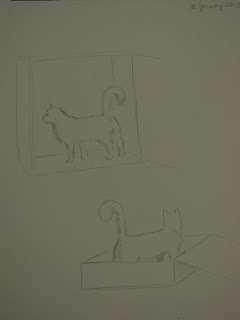 (It's really hard to draw kitties, especially from memory, but you get the idea; the second sketch is better proportioned.)

So she had quality days until today, when she succumbed to the non-food-related health problem (she was at least 16, and may have had a stroke at some point). I'm glad she didn't linger but I'm going to miss her so much.
Posted by Laura at 10:10 PM

Beautiful, sweet Princess kitty. She was so lucky to be so loved and have such a good home. I am so sorry for your loss. {{{Hugs}}}

I'm very sorry for this. You two were good for each other. *hugs*

Oh! I'm so so sorry.
I'm behind in my blog reading or I would have commented before.

I know how much you loved her.