On to the weaving! First, though, the allusion to rose tea is because that was the beverage of choice for the weekend afternoon velvet weaving sessions. Kim gave me some rose tea in December, and I was so smitten I bought more early this year. It's almost gone! 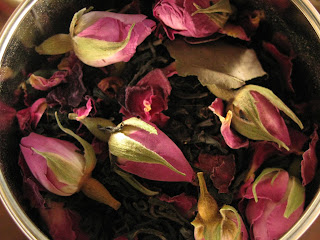 (Rose Petal Tea from Republic of Tea)
Okay, now really on to the weaving.

Once you're all set up, the weaving seems like a piece of cake. Basically, you weave three rows of ground weft (the same yarn as the ground warp) using both the ground warp and the pile warp. This will hold everything in position. Then for one row you lift only the pile warp and "weave" in a pair of thin brass strips. Then three more rows of ground weft with both sets of warp, then only the pile warp with brass strips. An authentic setup actually has a tiny (brass?) rod with a groove instead, but those are not commercially available. Quarter-inch wide brass strips can be found in hobby stores. Three times...and then you are out of brass strips, because you only have three pairs.

THAT is when the fun really starts, because you take out a scalpel and slide it along between the brass strips, slicing your looped pile warp into genuine fuzzy pile. Ooh. Then you pet it, and weave the brass strips into the next spot. And on you go, with more fuzziness to pet each time you cut. 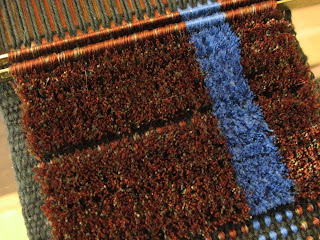 The worst striation is from tension issues with the pile warp--that is the main problem I will have to resolve the next time I try this. We had 1/2 ounce fishing weights, one per bobbin of pile warp, but those were actually way too heavy for what I needed, and I ended up taking them off and dealing with insufficient weight instead. It got pretty aggravating, but the results were better. Not fantastic, but better; with the too-heavy weights, the ground weft wouldn't stay firmly in place, and the tufts of pile didn't touch.

Why do you need weights anyway? Well, the pile warp weighs something. I found that I used about 10 inches of pile warp for every two inches of weaving...as you use up thread, the bobbins dangling from the cantra weigh less. The pile warp doesn't stay firmly wrapped over the brass strips, and it doesn't cut as evenly, even using the "hold your breath or exhale as you cut in one smooth pass" technique Barbara Setsu Pickett taught us. Next time around, I will try smallish washers as weight, so I can adjust it more incrementally.

As I mentioned, there is more take-up of the pile warp than the ground warp (i.e. you use more pile warp). If you had two back beams on your loom, you could theoretically wind ground warp on one and pile warp on another--except then you can't weave patterns in the velvet, because patterning means using different amounts of each warp group. To allow using different amounts, they really each have to be wound separately, and weighted so the pile warp is taut enough to behave.

I tried some simple patterning--sometimes weaving loops (called uncut velvet, when you just pull the rods out instead of cutting between them) or just not weaving pile at all in spots, which is called voided velvet. The blue square that miraculously appears from nowhere is a supplementary pile warp. I inserted it after the fact and let me tell you, it was very aggravating to weave! I could have improved it but it would have taken longer than being aggravated, so I opted for less time fiddling with setup and dealt with the aggravation since I only planned on a tiny section anyway. 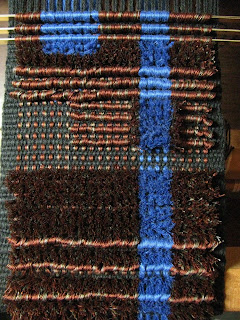 With more harnesses on your loom (I only had four on the rented Rasmussen table loom) you can have several colors of pile warp to choose between, each threaded through its own harness. To switch colors, lift just the one you want to use. Next time I will *plan* to try it, instead of being spontaneous, and I will insert the extra set of warps in the beginning, and make string heddles to lift them (because my loom only has four harnesses, too). 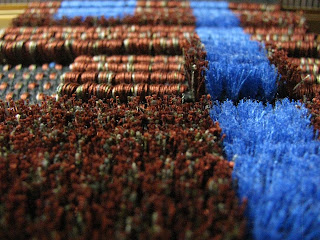 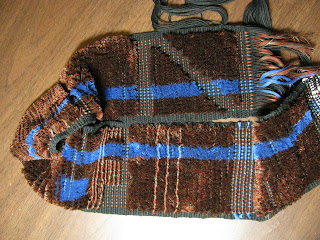 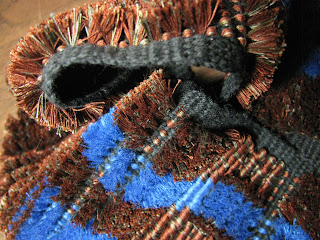 Pictures and info from elsewhere:
* Scroll down to see samples by Barbara Setsu Pickett with rods left in place.
* Adventures in Velvet Weaving by Suzi Gough; Journal for Weavers, Spinners and Dyers 221, March 2007 (this is a cached pdf which will download for you to read) The author took a similar workshop from Barbara, and wrote it up in greater detail.
* Blog post by someone who was in the same workshop as me and who also took better pictures.
* Barbara Setsu Pickett is also leading a study tour of velvet ateliers in Italy, for the Textile Society of America (webpage inaccessible at the moment). It looks quite excellent; if you have a bunch of extra vacation days and an even bigger bunch of dollars, you should go!
* Barbara Setsu Pickett at the loom--check out the little velvet books she makes from her weavings!
* Lisio Foundation (Florence) - velvet and brocade weaving
Posted by Laura at 4:07 PM 8 comments: